We are to use several preset tracks that are off in one way or another and make them right. There are different problems encountered in each section and we are to use the tools handed to us by GarageBand to correct these errors. Each section uses a different tool although in some cases we are required to use our knowledge we learned from the previous lessons. 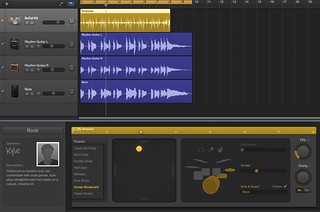 In this section our different tracks are all lined up time wise. This portion of editing is used to master the songs actual sounds. We can use the drummer editor to change the amount of sound each snare or cymbal makes and how much they effect the beat. The drummer editor is the tool found on the bottom of the screen of the photo above. This feature allows for us to really emphasize our pauses and when the beat hits.

This section is our “multipass beat” section. This feature allows for us to record a measure, or multiple measures, of a beat for a song. This feature not only allows for us to record a single bass line but at the same time we can record over this bass line with snares and hits to create an entire drum line. We can do this by finding the dum type that we would like to use for this beat. In my case I chose to use the “Boutique 808”, an electronic drum machine with pre-recorded sounds. We can record over a single section by finding the “Cycle” option at the top of the screen. This “Cycle” option can be found by pushing Command< “C” on the keyboard at the same time. We will see a yellow bar at the top of the screen of the appear and then we are able to drag and shorten it to our liking. This bar allows us to repeat what is within the measures it covers. Then we find a bass or hi-hat sound that we like by using our Musical Typing option found in the option “window” at the top of the screen. Then we press “R” on our keyboard and record the single sound beat that you would like. The track will loop over what you have already recorded. We can then select another sound from our Musical Typing keyboard, and record over this section again and again until we are content with the beat we have created.

The next part of this section works with “Arpeggiated” drum machine beats. This option creates a repeating sound when you push one of your musical keyboard keys. This option is found on the bottom right of the screen in the controls section of the beat machine. We can then use this to record “Overdubs”.

In this section, we learned how to create loops from our beats. A loop is something that will play over and over but sound smooth and consecutive rather than choppy. The first thing we needed to do was create the sound that we want to use for our loop and then add the “Cycle” region above those measures. If you press play it will play as if it was a loop. If it sounds on tempo and loops well, then we can turn it into a loop. If not there are some effects we can use to assist this. First off we want to turn on the flex track for this track. This is found in the bottom left corner of the editor. Now you can set flex markers. This allows us to line up our beat with each bar. To set a flex marker, fin the hits in the song and then drag them to the nearest bar. The song can also be trimmed and edited down to just the parts you would like from t by using the Command>”T” function on the keyboard. This allows you to cut the track where ever your playhead is. Once your song is finalized we want to merge all of our tracks as one track and then make a loop from it. To merge tracks we want to select all of the tracks together and then go to the “Edit” tab, and scroll down until you find join tracks. Now we can make a loop. After all the tracks are one track, go to the “File” tab and then scroll down until you find the region loop option. create loop and select its categories. 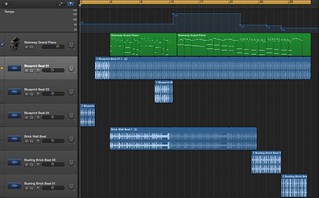 In this section we used the tempo track to create dramatic change in our beat. The tempo track is found under the “Track” tab. This will bring up a region above all of your other tracks with a blue line through it. This blue line controls the tempo of your song. when you click on the blue line you create a marker that is moveable to create a slower or faster tempo. If you double click on one of the markers you can type in the tempo you would like to set the different regions at. If there is a tempo change we can use two markers to gradually bend the tempo to that speed rather than such a sudden drop or rise, by dragging the line up or down.

In each section I learned and encountered a great deal of problems with GarageBand, as well as ways to fix each problem. The lessons provided a tactic or skill that allowed for the problem in each section to be fixed. For example when our tempo doesn’t match up with another tempo, we can use a groove track to force it to match up. I learned quite a few different skills in garageband that will be good to know when producing mixed songs.